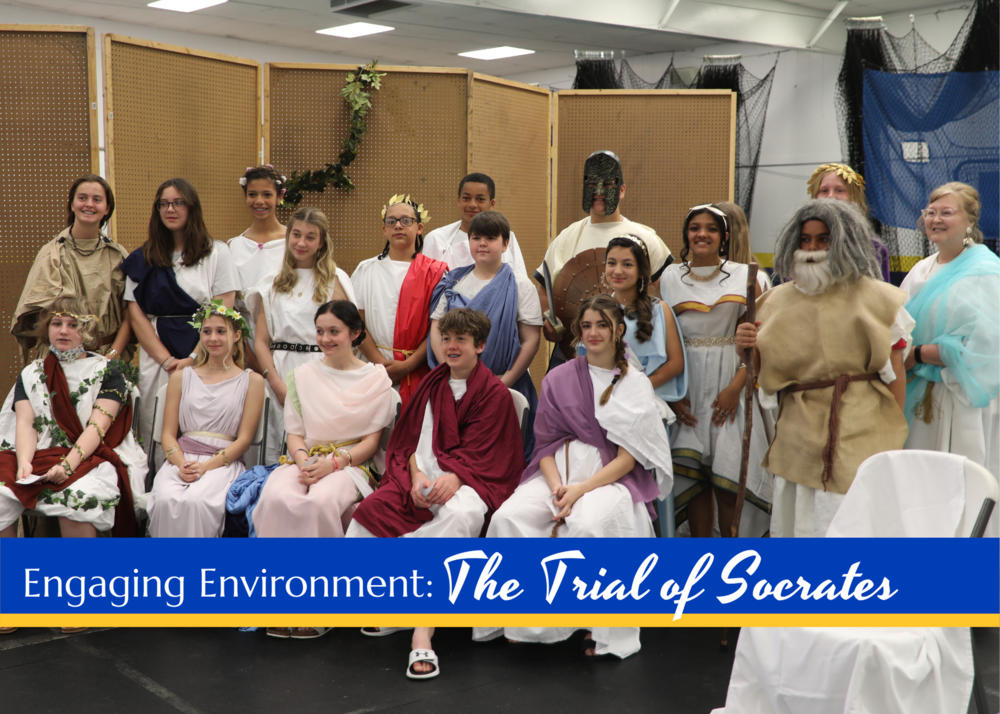 Teaching has always been a cornerstone of Diana Nixon’s identity. And to that end, the Trial of Socrates project has always been a cornerstone of her class. Mrs. Nixon will retire this year after forty-three years of teaching, thirty-three of which were right here at Wichita Collegiate. After teaching 5th grade for ten years she took over the 8th grade Ancient History class, and for the last twenty-three years, that has been her home. The interactive Socrates Trial was one of her first major projects every year since, for the last twenty-three years it has been something our 8th graders look forward to doing.

While the spring project itself may only last a couple of weeks, the research preparation for it starts long before the students realize. Beginning in the fall, Mrs. Nixon starts introducing primary sources and continues to touch on primary sources throughout the year. Considering that the Trial of Socrates uses ONLY primary sources, this ensures that students are well prepared come the spring. By the time they begin their research on the original trial, the students are well-versed in how to dissect the sources. Questions Mrs. Nixon teaches them to ask include: “Who provided this document?”, “What was their perspective as they created it?”, “How do you discern what their perspective was and how that influenced the final product?”

Creating an environment that promotes both critical thinking AND healthy civil discourse is the entire foundation of the Trial of Socrates project. Mrs. Nixon is quick to point out to the students that the trial isn’t about the charges against him. Historically speaking, there were no laws against what he did. However, Athens was in trouble and they needed a scapegoat. Mrs. Nixon quickly asks the students to connect the dots with the modern era. She challenges them to connect with current nations, including our own, before reflecting back on the trial. Without much prompting, the students start to see for themselves both the real AND hidden issues that instigated the trial. And then the real fun begins.

The project itself focuses on coming full circle. The students are encouraged to be reflective, so they always start by taking a “Pre-Trial Survey.” This activity asks them questions such as “Are teachers responsible for the actions of their students?” and helps create a measuring stick for the rest of the trial. The students take the same survey at the end and discuss the changes in their personal responses and also that of the group as a whole. Mrs. Nixon says seeing the students become more open-minded, critical thinkers throughout the process of the trial is one of the more satisfying parts of her job.

The class applies for different roles (Socrates, the judge, jurors, and more) after researching the historical figures and making an argument as to why they are best suited for the role. Mrs. Nixon is quick to point out the importance of each role. Each position wields its power in different ways. The jurors are tasked with creating questions that are both historically accurate and applicable. And the main characters have to be able to answer those questions AS their character would have. For both parties, knowing the history and perspectives of people at the time is imperative to successfully re-enacting the trial.

In the end, we never know which way the trial will go. Mrs. Nixon says it often depends on how many parents help round out the jury pool. Turns out, parents have a hard time finding their children guilty. Socrates can also be found guilty, without being sentenced to death. The outcome has many different possibilities, and often you will see they vary from class to class.

As her time at WCS comes to an end, Mrs. Nixon is sad to be saying goodbye, but is thankful for all of the wonderful memories. It made her think of something she has often said when turning down her students request for a practice trial, which is, “This happens once, and then it's history.” Mrs. Nixon’s time here is about to be a part of Wichita Collegiate history, but what a sweet season of history it was.