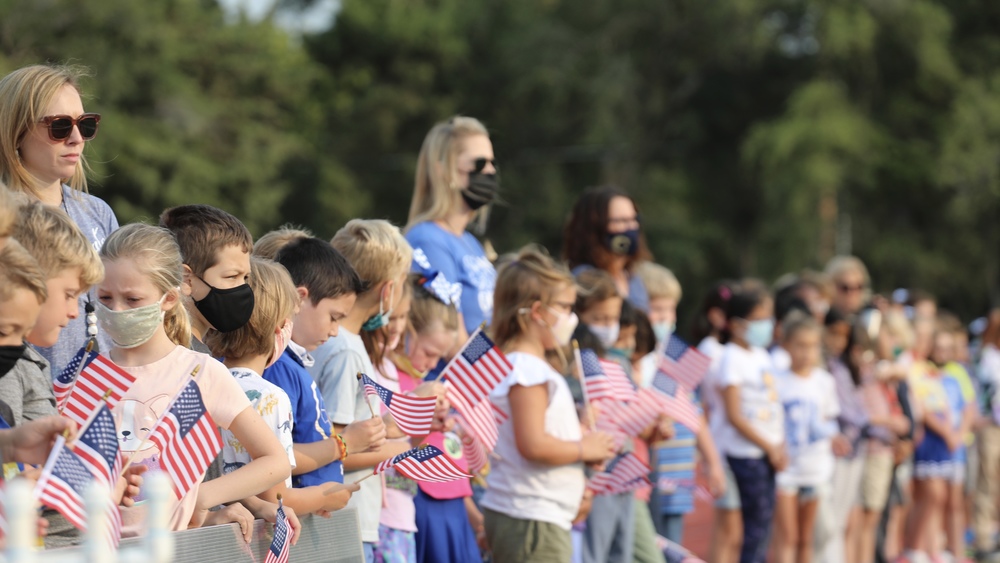 A monumental day in our country’s history, everyone remembers where they were when they heard about the terrorist attacks of 9/11. As we reflect back on that fateful day 20 years ago, current faculty members who were on campus, whether as a student or a teacher, shared their memories of that day and the days that followed.

I was in my classroom when Bunny Hill came by to give me the news. One remembrance I have is how incredibly imprecise reports were at first. Bunny told me that it was being reported that over 50,000 people must have died, and I remember thinking, “This is OUR Hiroshima.” Of course, the death total, while significant, was thankfully much less.

I remember being at my desk in Dave Hawley’s history class and hearing mumblings about what was happening. One of our classmates had been at the dentist and saw coverage of the events on TV. I remember being called as a Middle School or at least as a class into the Black Box Theatre to hear about what had happened more officially.

It was such a difficult day but one I remember like yesterday.  Suzanne Beauchamp was the Head of Lower School, and she had a TV in her office that barely worked, but several of us were glued to it at lunch and tried to make sense of it all. I remember multiple students being picked up to go home almost immediately after the plane went into the Pentagon. It felt so sad that people did not feel safe.

A few days later, the Wichita Fire Department sent 12 firemen to NY to help, and my husband Tod went.  It was so scary to have him gone, but I knew it was right to let him go. Ellie and Maggie really struggled with it, and it was hard to explain to them.  He filled in at New York fire stations and attended funerals of many firefighters. WCS had a vigil in the Amphitheatre, and that was so helpful. It was an unforgettable time.

I was in 1st grade in Mrs. Pangrac's class, and I remember she gathered us all around her and explained very gently, but seriously, that bad men had flown planes into buildings and had hurt a lot of people, and that it made a lot of people scared. I don't remember many of the specifics beyond that but I just remember not really knowing how to feel about it. I definitely didn't feel scared because Mrs. Pangrac had been so gentle in conveying it to us. Interestingly, that is the only 9/11 memory I have; none from home, just that one from school.

I have a very vivid memory of 9/11/01. We heard that something was going on in New York, so we turned the TV's on in the commons. We saw that one building was already smoking from the first strike, and then as we were watching, the second plane hit the second tower. The commons was full of students, and we all watched in shock. And as we continued to watch, the two towers eventually fell. There was not a sound until the building started to fall, and then crying and disbelief overcame the room.

I was in Mrs. Froggatte’s first hour and my dad walked in and said, “There has been a plane crash in New York, come on out to the commons.” And slowly all the classes started trickling in, and they rolled in TVs on carts. And we were just sitting there watching the news. We watched the other plane hit the tower, and we knew the first one wasn’t an accident. And then around 11, I don’t think they said school was cancelled, but we just started leaving. In that moment we just didn’t want to be there anymore. The world was so much smaller then.

I was in my classroom waiting for my students to come into class.  I wondered why no one had yet arrived, and then one student came in to tell me that a plane had hit the Twin Towers.  I imagined a small plane that somehow tragically got off course, but then the student told me that it was a large passenger plane. The TV monitors had been on in the Commons, so that is how the students knew before I did.  I turned on the TV in my room and saw what was happening. I was in utter shock and disbelief.  Everyone was in shock. And although we stayed in school that day, I really can't remember anything about what happened in my classes other than all of us trying to process the shock and horror.

I have since then tried to avoid seeing again the footage that I saw that day when I first turned on the TV.  Such an absolute tragedy.  So many innocent people were killed, and so many families put through unimaginable grief and devastation. Such a loss for our country.

I remember that day with only a few details. I remember the feeling of great sadness and disbelief. Each chance we got when our kids were not in our supervision, we watched the news in the Early Childhood office. I remember how worried Jean Oser was for her daughter who worked in the area. We waited anxiously for her to receive a phone call that she was okay. We were worried and prayed for the people who were in the buildings and the rescue workers trying to save them.

I also worried that the attacks were not over and the possibility that we might have a war on US soil. As the days unfolded, it was the daily topic on the children's minds, even my little kindergarteners. Everyone was glued to their TV's and car radios day and night.  We watched the rescue efforts turn into recovery efforts over the course of the weeks that followed and the death tolls kept rising.  Our school counselors at the time, (Kathy Overman and Lisa Schriefer) provided several letters to help parents navigate the issue with our children from preschool to high school. The idea of terrorism became real that day, and I was forever changed.