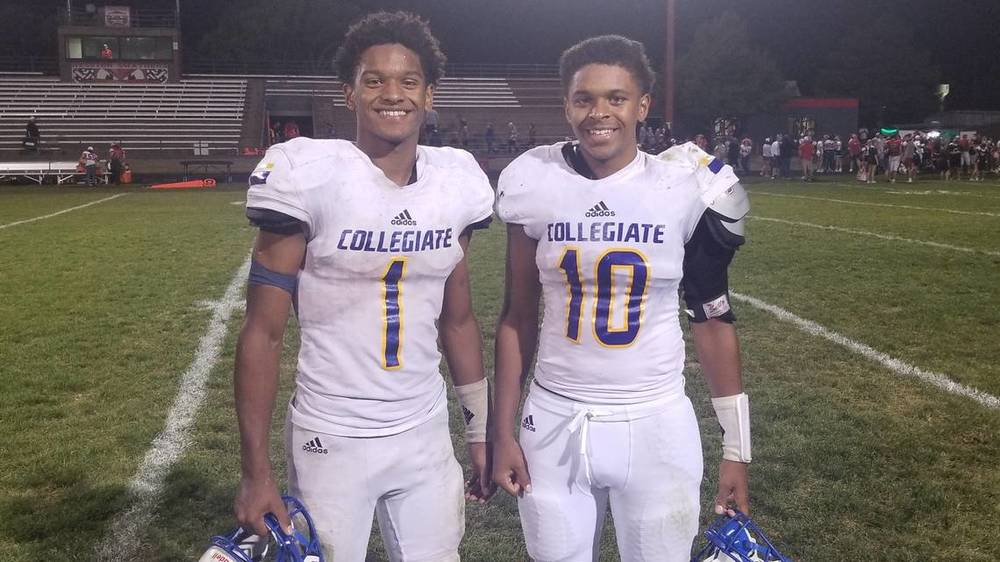 ‘It makes my heart smile’: Fair brothers team up to push Collegiate football to 4-0

One year ago, it was Michael Fair scoring touchdowns and receiving the glory as Collegiate’s star quarterback.

But after tearing the labrum in both shoulders, Fair was unable to play quarterback for this season, his senior year, and switched to wide receiver in a role reversal with his younger brother, Wesley, a sophomore who is now the quarterback after being an all-league receiver last season catching balls from Michael.

On Friday, the Fair brothers teamed up for all four touchdowns in Collegiate’s 31-10 victory at Hesston in a battle between previously unbeaten teams. Wesley Fair rushed for 150 yards with three touchdowns and threw for another, a 31-yard score to his older brother for their first touchdown connection of this season.

Through Collegiate’s 4-0 start, Wesley Fair has racked up more than 600 rushing yards and accounted for 14 touchdowns.

“I loved playing quarterback, but after my injuries I just wanted to stay on the field and help my team win,” Michael Fair said. “It’s cool to be on the other side, catching the balls now. Wesley is doing a great job. He’s killing it.”

For some seniors, seeing their younger brother replace them and excel in the role could lead to some jealousy. Not in the Fair household. According to Collegiate coach Troy Black, Michael has been Wesley’s No. 1 supporter since the day he was named starter.

“Michael is just a great, great kid,” Black said. “He’s a great leader, a great teammate, and Michael just wants to win. He comes from great parents. We’re lucky to have kids like that in our program.”

When Wesley faced his first bout of adversity as starting quarterback last week in a game against Rose Hill, it was Michael who was in Wesley’s ear on the sidelines, being the calming influence and urging him to put his mistakes behind him. Sure enough, after struggling with turnovers, Wesley was able to rally Collegiate in a come-from-behind effort to win 34-31 in overtime.